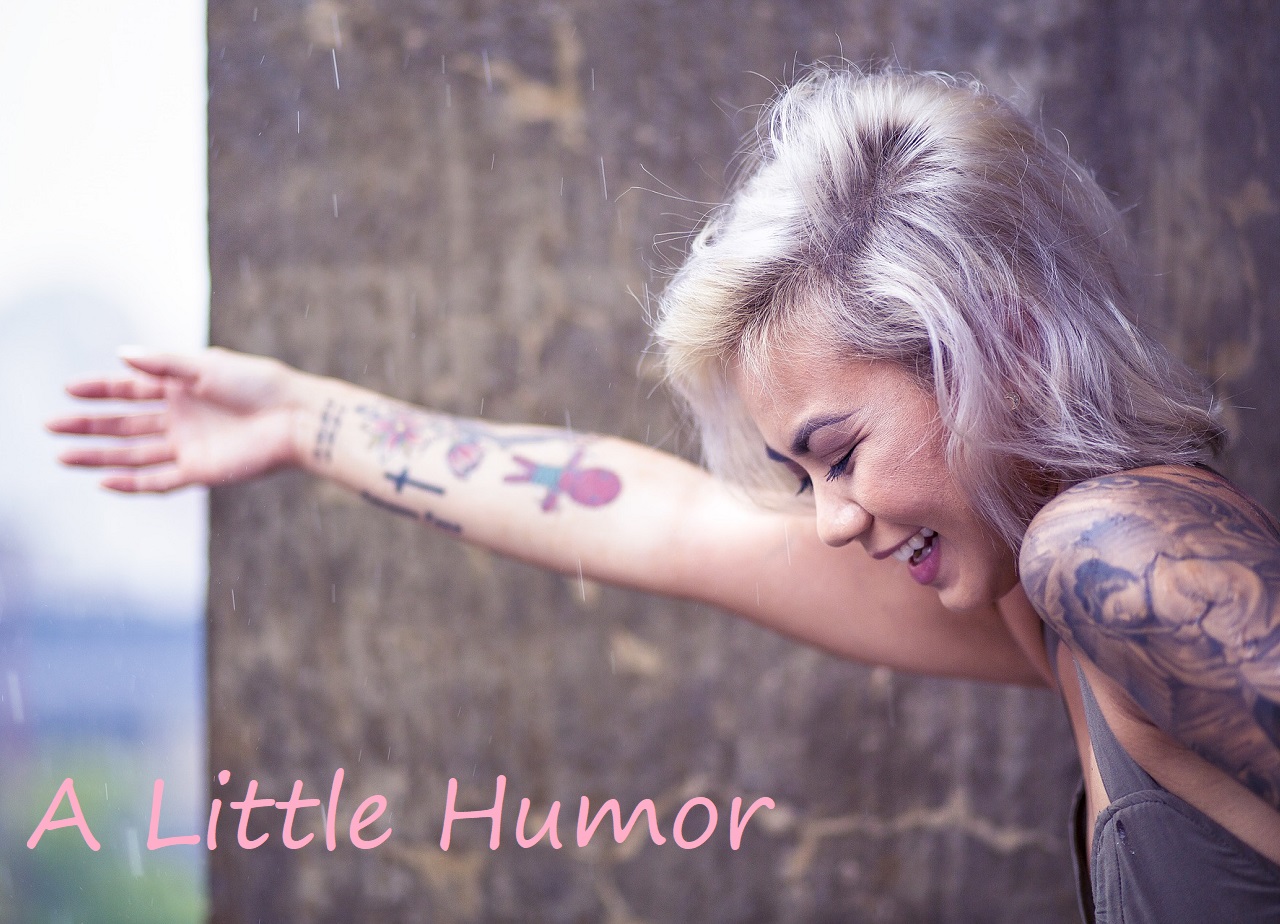 One southern dish that my Steel Magnolias-esque mother-in-law used to cook for family gatherings was ham rice. It was a simple, yet delicious and much requested dish that included ham of course, but also rice made with the juices of the ham, hence… ham rice. Another southern favorite that my Yankee and western upbringing never heard of before.

My then husband was a big fan, as well as was my youngest son. Whenever we had dinner at grandma’s, she always was sure to have plenty of ham rice ready. And only if you were very lucky, was there any to take home for later.

I remember after one Thanksgiving, during that time in the late-afternoon after the last dessert dish has been put in the dish washer, the first football game of the day has finished, and the hunters and gatherers are moving in on the buffet table to scoop up their leftovers to take home for their families to enjoy later.

I survey the table, and of course, there’s just a few grains left in the bottom of the pan. I think for a second about scooping those up, but it’s not even a full spoon’s worth. I immediately wonder which family member has gotten there before me, and hear a sister-in-law lament, “Nope, never any ham rice left! We didn’t get any either.”

I got the instructions from her, and they were in that precision format that I’m sure many of you are familiar with when having treasured recipes handed down from sage family cooks.

“Just get a ham, put it in a crock pot and fill with water about half-way up. Let cook overnight, then use the juice with rice.”

I could fit that on a post-it note.

I committed the instructions to memory and couldn’t wait to surprise my boys with ham rice anytime they wanted it. No more having to wait to go to grandma’s.

I followed the instructions to the letter, even bought a crock pot big enough to put a ham inside. Cooked it overnight, and though the broth looked a little lighter in color than I remember hers being, cooked about 3 cups of rice with the juice, and viola!

My husband: “This ummmm doesn’t look quite right, it’s a little light.”

Me: “Ugh! I followed the recipe to the letter (okay, to the post-it note). Hmmmm maybe I used too much water?”

Not one to give up, I tried that recipe about four or five more times over the course of several months. Always with the same flavorless results. I figured, my mother-in-law is just magic.

“She always does make fried chicken, BBQ chicken, pork chops, and just about any other southern comfort food perfectly and effortlessly, like every time! She’s just got that magic touch that can’t be replicated.”

So I placated myself from the failure by reasoning that a grandson and son should have something special that only Grandma/Mom can make. “After all, I make a lot of other good stuff like lasagna and burrito pie, let Grandma have this one.”

I know what you’re wondering, “Okay, where is the “triumph” in this story?” Read on.. and take this as another of those ‘never give up’ inspirational tales. 😉 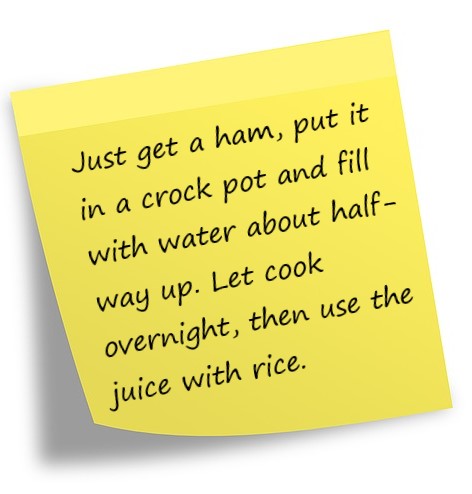 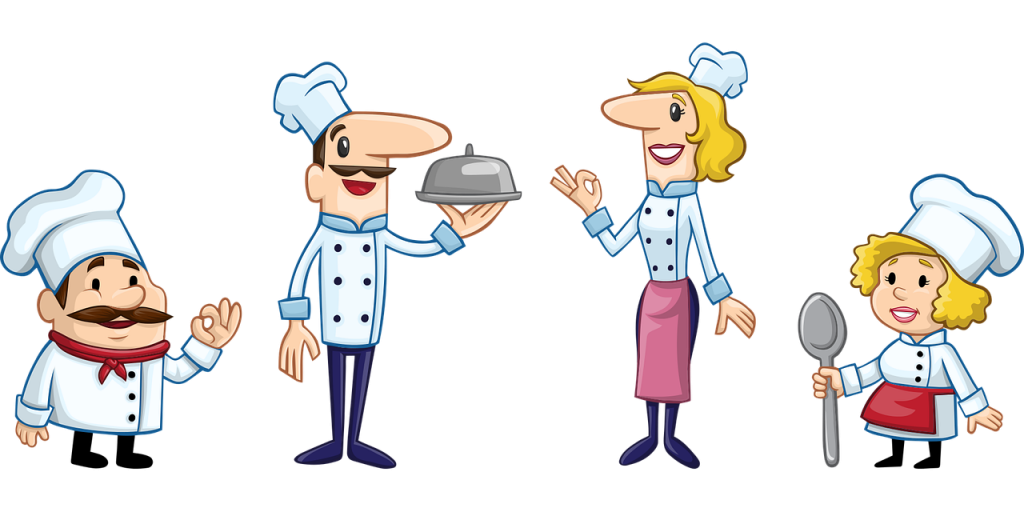 Fast forward several years, my husband and I aren’t together any longer, and I actually made the wedding cake for his second marriage (but that’s another story). We hadn’t lived near my mother-in-law for quite a few years, and thus my youngest son had to endure a severe lack of ham rice over the years.

We were visiting during the Christmas season, and I thought, after all these years, I’ll give it another try and asked her again to tell me how she makes ham rice. I’m sure she’s thinking, “She still can’t make it after all this time?!”

This time, however I added a crucial question in an NCIS meets Rachel Ray type way to get the bottom of this pork dish mystery. I asked her to tell me exactly which brand of ham she used. I thought, there’s got to be something I’m missing.

“Smithfield’s usually, or whatever they have at the grocery store. Uncooked, make sure to get uncooked ham or it won’t make any juice.”

Ah hah!!!! Could that be the missing piece that’s plagued my efforts to replicate that dish all these years?

I couldn’t wait to try it once we got back home. My son of course was like, “Are you really going to try that again? Isn’t it a waste of ham?”

“I appreciate the vote of confidence, but I think I’ve got it this time!”

“Mom, please don’t get my hopes up again about that. You know how much I love it. Maybe only Grandma can make it, I’ve never had it anywhere else.”

“Just one more try, just give me one more.”

He said okay, but I could tell it was just half-hearted and he was really just humoring me.

When I got to the grocery store, I searched for Smithfield’s, and low and behold, I realized I had been buying a pre-cooked ham all those previous attempts. I actually didn’t know until she told me that there was such a difference between cooked and uncooked prepacked grocery store ham – Wow Learn something new every day!

BTW..it’s not always easy to find uncooked ham, as I’ve noted since. Sometimes, I have to search three different stores before I can find it during the “off” season. Yes, even uncooked ham has a season, similar to turkey. it’s easier to find around Easter, Thanksgiving, and Christmas.

So, I unwrapped the ham. put it in the crockpot, and waited. We awoke in the morning to the delicious smell that was very similar to the one in my mother-in-law’s kitchen during the holidays. “Could I have gotten it right this time?”

My son even remarked, somewhat surprised, “It smells right!”

I pulled the flaky and dark salty ham meat out of the crock pot. It looked and smelled delicious and would be served along with the rice, but in this family the ham rice was the star. I was actually getting my hopes really high now, because there was an immediately obvious difference in the broth, it wasn’t a weak light tan color this time. It was a beautiful dark caramel color!

So I measured the right amount of broth, added just a little water (about 1/4 water to ham juice ratio, otherwise the rice won’t cook quite right, and put the rice on the stove to cook.

When it was finished, about 20 minutes later, I excitedly called my youngest in to try it out.

“Mom, you finally did it! This is just like Grandmas!” and that was all he said because his mouth was filled with the fluffy ham flavored rice after that. A glorious moment of Mom triumph!!!

Woo Hoo!!! One little thing, buying the right type of ham, made all the difference. I felt like Isaac Newton must’ve after discovering gravity. All that hard work paid off.

Thomas Edison famously once said when asked about trying to invent the lightbulb, “I have not failed. I’ve just found 10,000 ways that won’t work.”

That’s just how I felt at that moment as my son confirmed my triumph. I just found a bunch of ways to cook ham rice wrong on the way to doing it right!

Now, I’m a pro and have cooked it a bunch since then. So, if you want to try it, get out a post-it note (or two) and jot this down:

You can save the extra ham juice in the refrigerator to make more rice a few days later.

It’s not always easy to identify an uncooked ham at the store, you really have to read the labels to make sure it does not say ‘pre-cooked’.

To cook the ham for ham rice properly, you need a nice big crock pot. This one is similar to mine. (also great for chicken, stews, and lot of stuff!) Get one for yourself by clicking the pic.

The Triumph of the Ham Rice